Territories of migration: Refugees in Space and Time
Questioning migrant experiences and testimonies from Sub-Saharan Africa and the Middle East 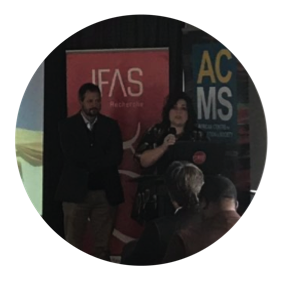 “It is time to consider that the way we categorise and label the people who are moving, over time and through different spaces, is impacting our own narratives and the ways in which government is responding to these people”.

The conference organised on the 15th of May 2019 by the French Institute of South Africa (IFAS), was an amazing opportunity to “cross the borders” and collect expertise on migration in the two greatest areas of departure: the Middle East and Central Africa. This conference was organised by the Institut Français Afrique du Sud- Recherche (IFAS-recherche), in partnership with the African Centre for Migration & Society (ACMS), the Afro Middle East Centre (AMEC), the Institut Français du Proche Orient (Ifpo), the Institut de recherche et d’études sur les mondes arabes et musulmans (Iremam) and the Observatoire des Mondes Arabes et Musulmans (OMAM).

At the conference migration was analysed through the lens of time, space, and language, both by looking at case studies from Africa and the Middle East. Three panels were organised to reflect these different approaches: Refugees & Their Social integration, Categorisations & Their Impact, and Migrations and Transformations. 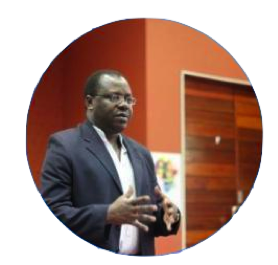 “In South Africa social cohesion seems to be a national priority but, on the ground, there is no concrete plan to achieve this goal”.

The first panel explored how refugees are socially integrated in different spaces. Space transcends territorial boundaries and includes socially constructed spaces, which can also co-exist in the same urban spaces, such as in Johannesburg. Tanya Zack, professor at the School of Architecture and Planning at Wits, exposed the social connection and dislocation of Ethiopian migrants in Johannesburg. Jalal al-Husseini, from the Ifpo, presented the politics of Syrian refugee integration in the Middle East, in its different evolutions. The panel ended with a study from South Africa, with Jean Pierre Misago (ACMS) presenting how mobility and social cohesion exist in some diverse South African communities. 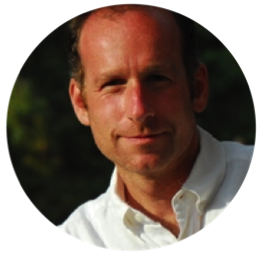 “If we are going to think about living with others, we first have to think that we have a future together”

The conference continued to examine how migrants are labelled through the lens of space and time and how this impacts the way governmental and non-governmental actors act. Mathieu Rey (CNRS), explored migration through time with a genealogy of the political concept of ‘refugee’, which has been in use since the 1600s. Jihane Sfeir (OMAM-MSH), discussed the immigration landscape of Lebanon and the different ways the Lebanese view migrants and refugees. Finally, Loren B. Landau (ACMS) engaged with the way in which governments and groups in Europe’s “migrant crisis” try to contain refugees in a specific space-time, to keep them away from Europe. 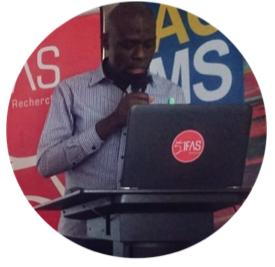 “Survivalist strategies of former Congolese Soldiers in Jo’burg include them holding themselves with a ‘military spirit’ to show they work with discipline and respect”.

This last panel went further in considering migrants in different spaces and time, and language. Lukas Spiropoulos (Wits) presented Greek migration through the lens of history in South Africa. Dostin Lakika (ACMS) talked about the survivalist strategies of former Congolese soldiers in Johannesburg who found access to employment in the security sector. The panel concluded with an example of migration that can be seen through the lens of linguistic landscapes. Ivan Panović, (Nanyang Technological University in Singapore) presented a case study of a quarter in Istanbul where migration can be perceived through public and visible languages structures over time.

Migration through the lens of art

Photo of the exhibition “Sea Ghosts” of the artist Bruce Clarke at the Alliance Française in Johannesburg.

Art is also a research medium through which migration can be explored. In occasion of this conference, the artist Bruce Clarke showcased his work called “Sea Ghosts”, which claims that “ghosts do exist” and that his approach is “an artistic approach to giving visibility to migrants”. His work presents images of migrants under screens of water, as a metaphor of the European vision of these people. Migrants are ghosts to them, in a sense that they are dehumanised. However, they exist. His work has been exhibited in public spaces in several European cities, and it is an example of how art can be used as a tool to open up a debate. His work was exhibited at the Gerard Sekoto Gallery at the Alliance Française in Johannesburg until the 1st of June.

Although these panels do not tie directly into physical health, one cannot help but notice the theme of migrant wellbeing and especially mental health throughout. Landau’s presentation of isolation and restriction to one space with no future shows that migrants’ agency must be acknowledged and supported. Thinking about linguistic landscapes in Panović’s work shows that translation work can be exclusive or inclusive. When former Congolese soldiers work in South African security companies, they are able to showcase their skills and share a common purpose. All three of these presentations highlight the importance of inclusions and acknowledgement of mental health and wellbeing. Labelling migrants determines the way we perceive and act on their behalf. Understanding how social construction around migration is done is essential to target their related health needs and find appropriate solutions. 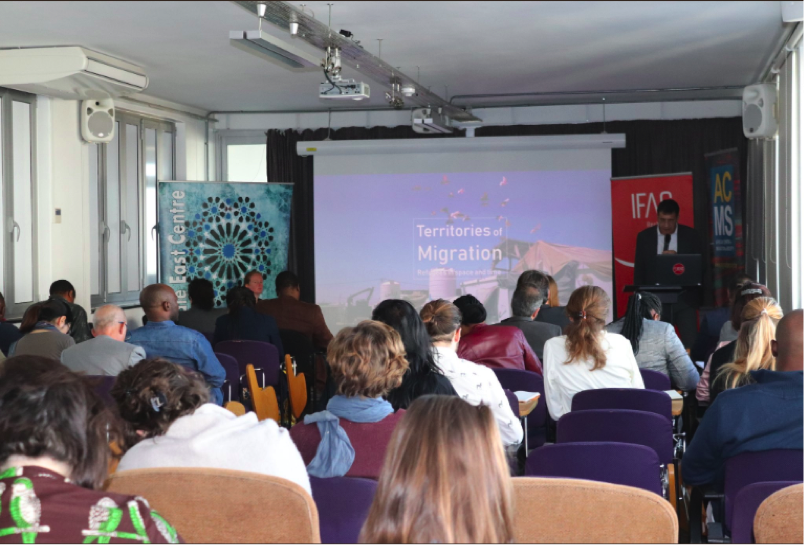 Photo of the Conference Territories of migration: Refugees in Space and Time, 15th May 2019. 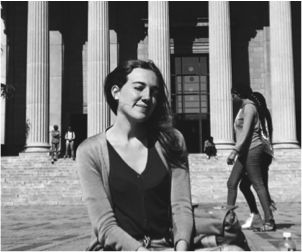 Sarah Talon Sampieri: MSc Global Health Policy student from the University of Edinburgh. She is writing her dissertation during a placement at the ACMS. Her background is in interdisciplinary life sciences and her areas of interest and research include global health, social policy, medical anthropology and communication. 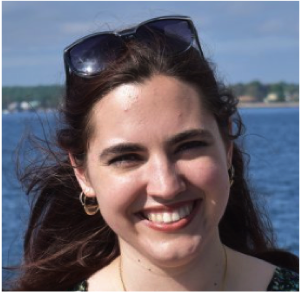 Elizabeth Hampson: MSc Comparative Public Policy student from the University of Edinburgh. She is writing her dissertation during a placement at the ACMS. She wants to support refugees and those who are forcibly displaced and has studied public policy, immigration, anthropology, performing arts, and visual arts to create an interdisciplinary mindset and approach. Her undergraduate thesis focused on refugee artists and their agentive placemaking through creating art.

Public Symposium on Migration and Health in Southern Africa and The South African Launch of the UCL-Lancet Commission on Migration and Health
Migration and Health Project Southern Africa Postdoctoral Fellowship
Related Posts
12 Mar, 19 _ Front Page
“The Personal is Political”: Engaging in arts-based teaching and research methods to center wellness in classroom and community spaces
05 Mar, 19 _ Front Page
“What futures were they ‘waiting’ for anyway?”: Addis Ababan youth in cultural dissent in the years leading up to the Ethiopian revolution, c.1950s-1974
01 Aug, 18 _ Front Page
A hustle for profit and protection: What informal mining reveals about governance in South Africa